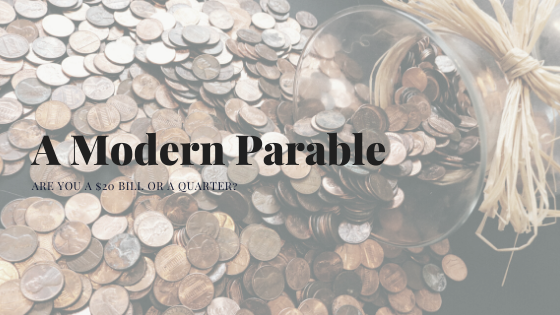 Two men walked into town, intent on making purchases for their employer. Both had similar lists: two newspapers, a business magazine, one cold soda and a Snickers bar.

All the large retailers were closed in honor of a festival but booths lined the main throughway. Yes, there was the newspaper stand, the magazine stand and several vending machines. All would be well.

The first man walked up to the newspaper stand. “I’d like two of today’s papers.”

He handed a crisp $20 bill to the vendor. The old man tending the stand shook his head. “It’s only $1. I don’t have change for that.”

The man shrugged and tried his luck at the magazine stand, only to be met with the same news. Standing in front of the vending machine, he noticed the highest denomination it took was $5. How would he serve his boss when it seemed his flashy money didn’t spend?

Meanwhile, the second man approached the magazine stand. He thumbed through the selection and pulled out the business magazine his boss wanted.

“$2,” the teenaged attendant told him.

The man sorted through his pocketful of coins and handed the boy eight quarters.

At the newspaper stand, he spent another four quarters. As he approached the vending machines, he noticed a man in an expensive suit staring into the glass.

“Excuse me,” the second man said.

The suited man stepped back and loosened the silk tie he wore around his neck. The man with the quarters thought it must be uncomfortable to wear such a thing, glad for the polo shirt and khakis he wore.

He dropped six quarters into the machine and selected the soda, rolling the icy can into the magazine. He sidled to the candy machine, deposited four quarters and punched in the correct number for the Snickers. Done! He’d accomplished all his employer sent him to do.

As he stepped away from the machines, he noticed the well-dressed man wore a long face.

“Hardly,” the other man grunted.

“I came to make some purchases for Mr. Mann but not a single vendor can help me. Now I’ll have to return empty-handed.”

“I have money you could borrow.”

The first man shook his head, opening his palm to reveal a now-crumpled $20 bill. “I have money, but it doesn’t seem to spend here.”

Sometimes twenty dollars has no buying power. A flashy bill looks great, but if it can’t be spent, what value does it truly have?

Are you the flashy bill in your walk with Christ? Those small things aren’t important enough for you to invest your time and effort in?

Sometimes what the Master needs is a handful of change.