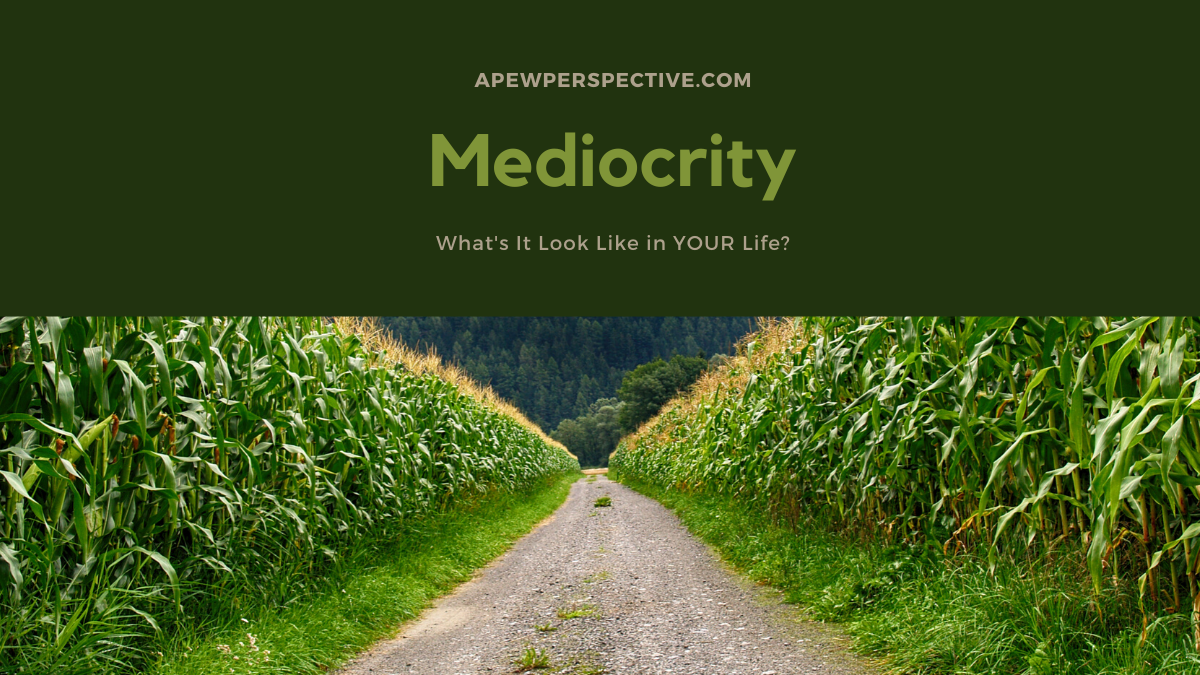 Who looks for a mediocre employee or a job with mediocre benefits? No one I know. But for some reason, we settle for mediocrity in our spiritual life.

Is there a single thing in your life that you wish was mediocre? A mediocre tax bill, maybe? Nope. We’d wish for a minimal bill or better yet, a credit in our favor.

If we don’t want mediocre, why would we offer it to God?

We’ve been studying the book of Revelation. God paints a perfect picture of a mediocre church in Revelation chapter three. Scan down to the fourteenth verse.

Ah, Laodicea. They didn’t think they were mediocre. In fact, this is how they saw themselves:

Historical records confirm that Laodicea was the wealthiest city in Phrygia when Rome was an empire. The wealthiest as far as the world was concerned, but God saw something different.

Mediocre. It doesn’t sound very appealing does it?

Christ saw these self-satisfied Christians in Laodicea through a perfect lens. What did He see?

“I know they works, that thou art neither hot nor cold,”

Are we any different? We live a good life. We don’t commit crimes. We are tolerant of our neighbors and, most importantly, go to church every week. Well, as long as it doesn’t interfere with other plans.

Most Americans are “increased with goods” (when compared with the rest of the world), but we won’t admit we don’t need anything else. Instead, we spend hours poring over the latest car, truck, computer, golf club, book, gadget or whatever it is we want.

We could be living for Christ and focusing on keeping the mission he left for us, but instead we’re wondering how to acquire that whatever-it-is.

Maybe materialism isn’t where you fall down in your godly walk. Perhaps it’s an obsession with sports or movies or music or electronic gaming. Your time belongs to whatever that passion is rather than to the One who redeemed your very soul from Hell.

Like our friends in Laodicea, we don’t know that we’re wretched, and miserable, and poor, and blind and naked (Revelation 3:17).

Maybe we can see our shortcomings. We know we’re too self-centered, so we sign up for another position at church. When the missionary comes to town, we take him to dinner or put him up in our guest room.

Now we’re living for Christ. Whew. Check that off my list.

Except that’s not how God sees it at all. Our Christianity isn’t a checklist. But if it were, the number one item would be “sharing the plan of salvation with everyone you know.”

Uh-oh. I thought that was the preacher’s job. Or maybe the deacon? Missionary? Sunday school teacher?

Remember Acts 1:8? But ye shall receive power, after that the Holy Ghost is come upon you: and ye shall be witnesses unto me both in Jerusalem, and in all Judaea, and in Samaria, and unto the uttermost part of the earth. (Emphasis added)

We will be witnesses for our Lord. If we choose not to open our mouth and share His love, people will still watch us and form an opinion about the God we serve.

I’m not a fan of door knocking. I don’t like when strangers come to my door. I won’t tell you it’s the wrong thing to do, though. Not if you feel God pushing you toward doing it.

I don’t have to knock on a stranger’s door to be a witness, and neither do you. We know people. Some of them don’t know Jesus. It’s my responsibility to introduce the people I know to my Heavenly Friend.

It’s my responsibility to speak with every person I know about a personal relationship with Jesus. But I fail. I’m less than lukewarm or mediocre.

What if no one else tells them either? Where will they end up?

“Behold, I stand at the door and knock” (Revelation 3:20) Jesus says. He wants to be so integral in my life that I can’t help but show Him to everyone I know.

Because thou are lukewarm, and neither cold nor hot, I will spew thee out of my mouth

One problem historic Laodicea had was getting enough drinking water. They would have to pump the water in (via aqueducts). By the time it arrived, the water from hot springs was lukewarm and the mountain fresh drinking water wasn’t much cooler than room temperature.

No one wanted to bathe in it or drink it. It was nasty stuff.

Our mediocrity hurts us, sure. Rather than laying up treasure and rewards for eternity, our half-hearted life and service are netting us a big fat goose egg. (Not a golden one, either.)

Worse, this mediocre living and witnessing acts as a roadblock to the narrow way of Life. People will have to shove us aside to get on the “one way” road to Heaven.

But the most horrifying part of being spiritually lukewarm is that it disgusts the One who loves us. The One who gave up his life so we could live is choking and gagging on our mediocrity.

Are you making Jesus puke?

Unless you get on fire for Him and work in His Kingdom like you mean it, your life, witness and worship is hitting His gag reflex.

Don’t stick your head in the sand. Reflect honestly on your heart, life and motives today. Line them up beside the actions you take. Does the spiritual barometer swing to hot? Or cold?

Or is your lukewarm Christianity making Jesus sick?