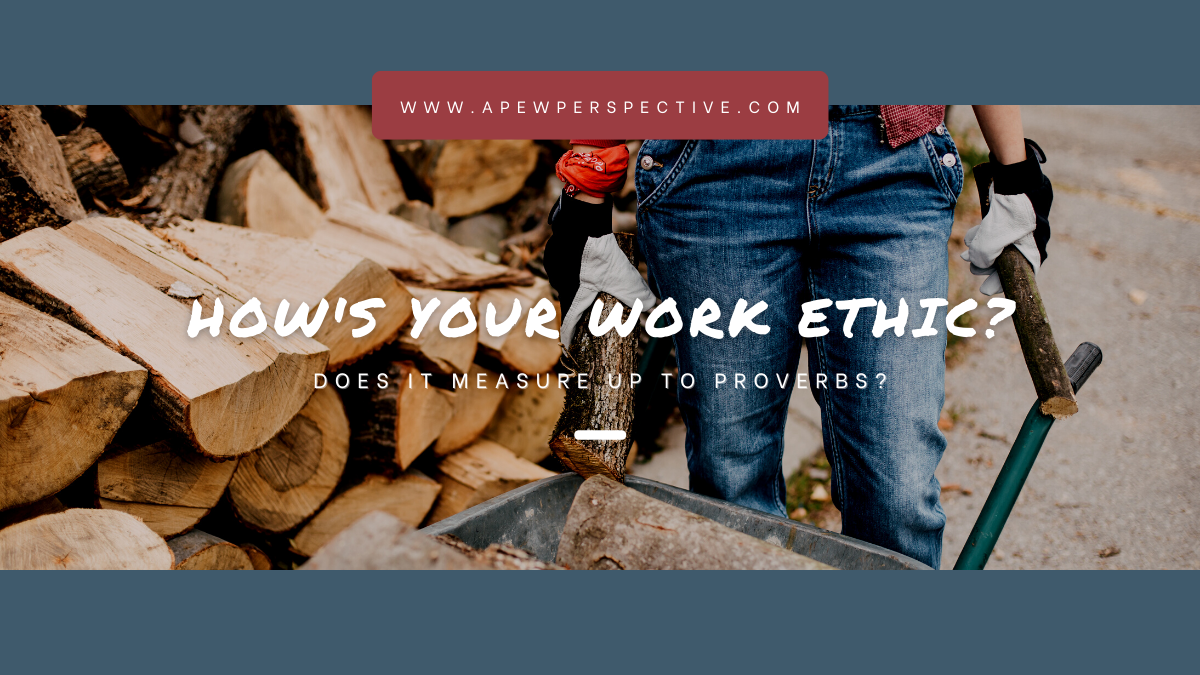 As a public educator, I discovered that most teenagers couldn’t define work ethic. Their disinterest in completing assignments and participating in class projects loudly declared how much they understood work avoidance though.

Yes, work is a four-letter word. But God created mankind with the need to work. Truly.

Work ethic measures how hard a person will work and what sort of outcome they consider is necessary to say a job is finished.

My mother instilled a strong work ethic in me. I think that’s what the Bible teaches, too.

During a recent survey of Proverbs, I found close to twenty verses that discussed the importance of having a strong work ethic.

Is there anything worse than wasting time? (Proverbs 18:9) It isn’t a reclaimable resource. There are only so many minutes in a day. Once they wind down, they are gone.

Proverbs uses the word “slothful.” If you think sloths are cute and cuddly, I have a few friends who would agree. However, if you want something accomplished in a timely manner, you don’t send a slot on the mission.

You wouldn’t even include a sloth on the team.

It’s no surprise to me that younger generations don’t value hard work. They’ve never known a world where the government doesn’t hand out free meals, free housing, and free money.

Even those who don’t benefit from those government freebies have experienced living a cushy life where they have few responsibilities. One boy looked at me like I was crazy when I asked him to pick up his empty Skittles wrapper and put it in the trash.

Does someone clean up his messes at home? Is he so clueless? Or is it a matter of entitlement?

In the end, our willingness to work hard shows respect to people around us. Our work tells them that we think something is important. We find value in learning a skill or successfully completing a project.

I’ve worked with people who do as little as possible. I don’t like it. And it’s not only because I’m the person who will do all my tasks and help others finish theirs. It’s because I have to pick up their slack. And yet they take home the same paycheck for less work performed.

The Bible says a lazy person is “void of understanding” (Proverbs 24:30). That’s right, the lazy guy is not smart. His laziness is going to come back to bite him in the end.

I don’t believe we have to work sixteen hour days and that we can’t sit down and chill after eight hours of work. God rested after six days of work, and if he needed a break then it’s clear we do, too.

But did we do a good job at the tasks we performed?

And whatsoever ye do, do it heartily, as to the Lord, and not unto men:

The bottom line: what would Jesus think of how hard we work? Would he be pleased with our completed tasks?

Or would it be like my mom following ten-year-old me into the bathroom I had just cleaned. She pointed out every stray hair and speck and water spot. Then I cleaned it again.

Eventually, I learned to do it up to her “standard.” God’s standard is even higher. He expects our best.